A Question of Focus The challenging thing about painting—and writing—is deciding what to focus on.

This is also true about life, by the way. 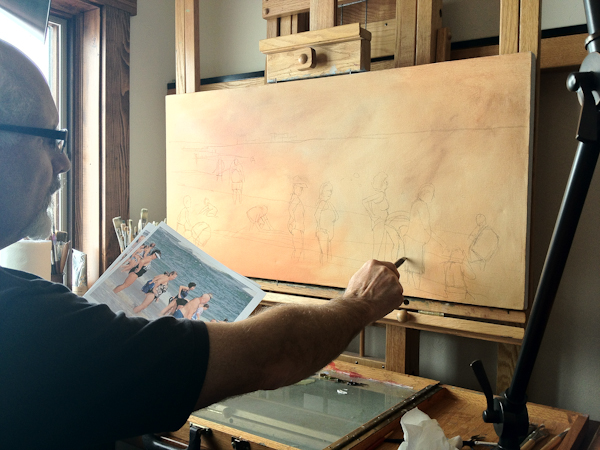 By the time Rick actually starts to block in a painting, he has already spent a great deal of time thinking about the composition: from the original source material (and it’s usually several sources combined), what will he keep? What will he change? What will he move, recolor, and shift?

The photo he’s using here as a reference is from an afternoon we spent last summer at a crowded beach at Ocean City, Maryland. Not only do the intersections of water, sky, and sand pose an interesting set of problems for a painter to solve, but where else can you find such a wealth of half-nude, real-sized models posing patiently as they sizzle in the sun?

It’s a rare painter who can reflect how gently laughable and enjoyable we all are as we move through our lives together. Similar to “Beach Ladies,” a painting like this reminds the viewer that none of us should take ourselves too seriously. 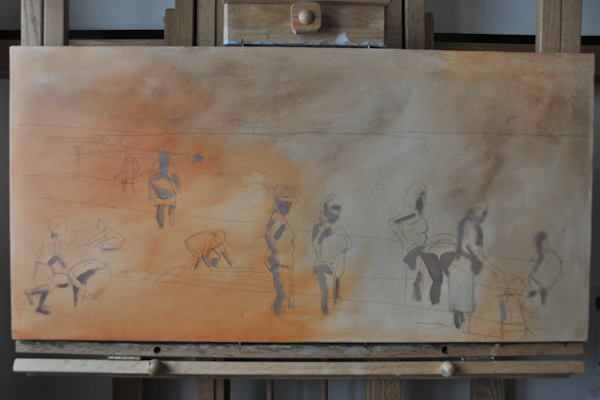 Watching an ambitious project like this take shape is also a gift. 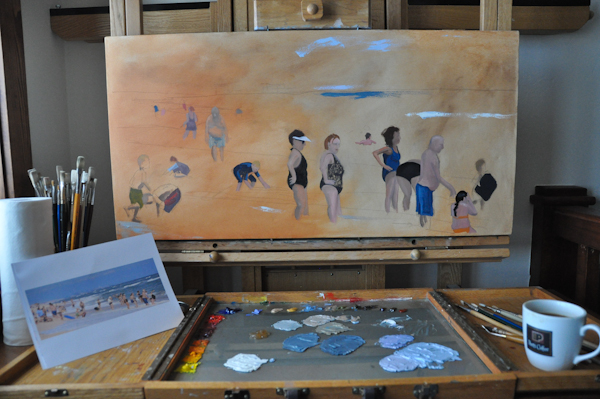 … to seeing the individual elements come to life, it’s a fascinating documentary of possibilities on top of complex decisions, all described in an infinite range of color.

This takes a steady hand and nerves of steel. 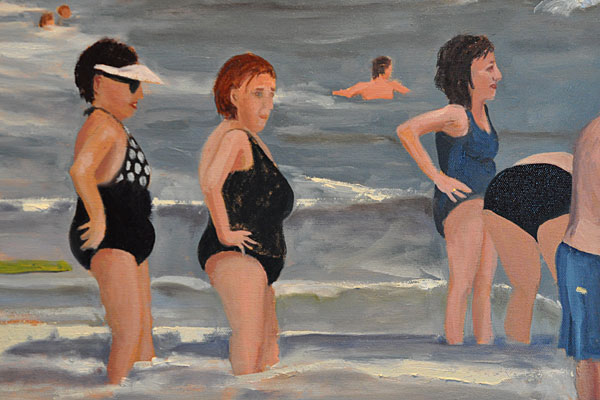 This painting in particular is endlessly entertaining to me. It has just as much interest from 12 feet back as it does from 12 inches in.

From 12 feet back, the three women in the foreground are profound and oddly hilarious studies in women’s shapes at various ages, bone structures, breast size and orientation, bellies, and butt shape. It also showcases nicely our propensity to have our hands on our hips with minor variations in elbow angles and hand positions allowed.

And I’ll bet you a cookie they were all wearing “The Miracle Suit“:
“Look 10 pounds thinner in 10 seconds!”

Who are they kidding? 10 seconds?! Have they never seen a committed woman struggling to get into a bathing suit that guarantees to compress her so effectively that she’ll look 10 pounds lighter? That’s at least a full three-minute sweat-and-swearing filled episode which, if filmed, would immediately shoot to first place as a viral video on YouTube. 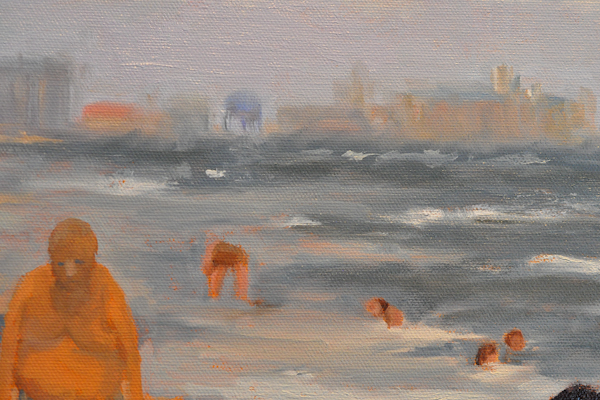 Yet from 12 inches in, you can see that Rick decided to leave the orange underpainting as the substance of the man, painting in around him to show the viewer his shape and movement. Plus he gave him shorts, which I thought was kind, all things considered.

Michelangleo: “I saw an angel in the marble and carved until I set him free.”

Rick: “I saw a fat man in the orange and painted around him, let him be.” 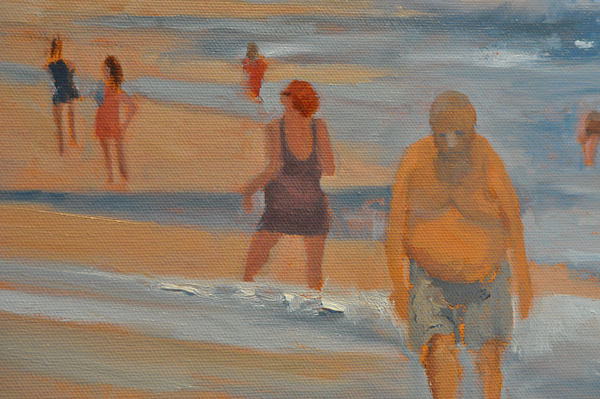 What to paint? And what to merely suggest with a swish and a flick?

It’s possible to use oil paint not only as a delivery mechanism for color, but also as a three-dimensional art medium, like plaster of paris or whipped cream. Applied with skill and the muse’s suggestion whispering in one’s ear, the effect can be amazing. For instance, you can apparently create a wave’s shadow that, under gallery lighting, will augment the painted suggestion of the shadow beneath it. 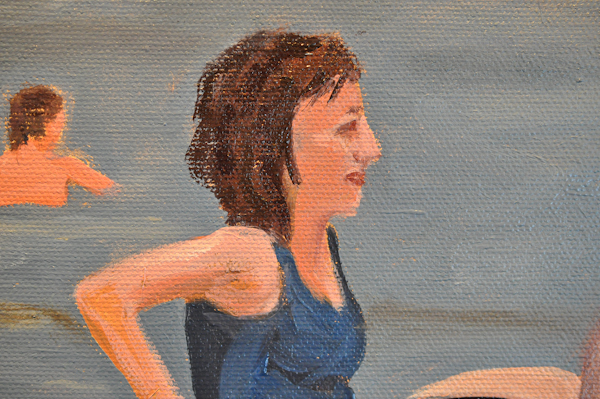 As often as I’ve looked at her, I can’t figure out who she looks like, but I’m sure I know her from somewhere. 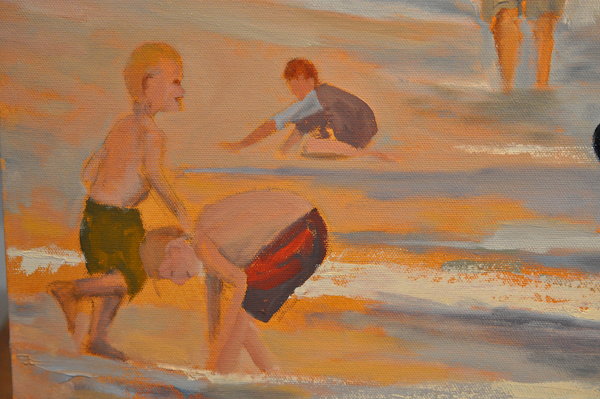 More underpainting, this time left to be part of a boy and part of a beach.

In painting circles, they call this “an interesting idea.” 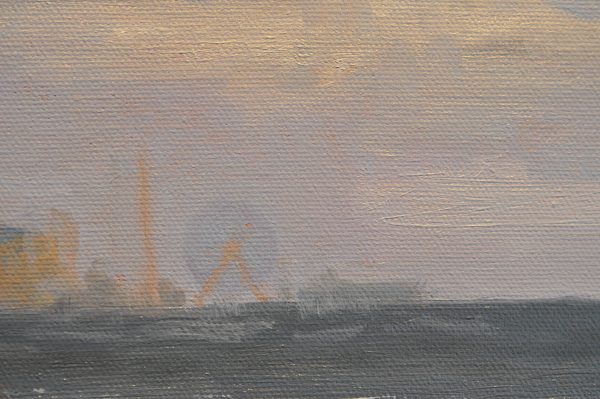 The decision to blur the building into the sea in the far distance looks like someone didn’t learn how to color in the lines, Mister!

And it makes that hazy atmosphere in the distance completely believable.

Like I said, it’s all a question of focus and choice. 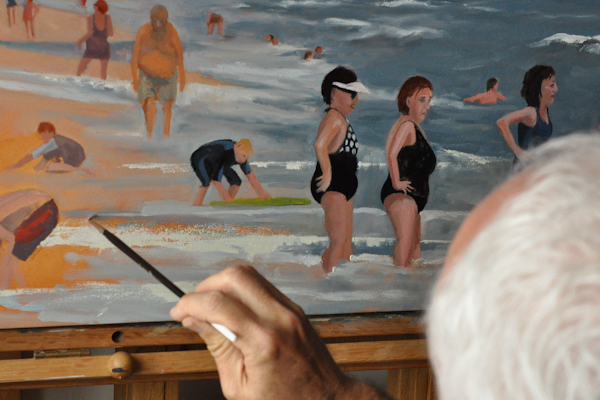 For the record, I have my own creative focus struggles.

For instance, sometimes when I should be focusing my eyes more on what I think I’m shooting… 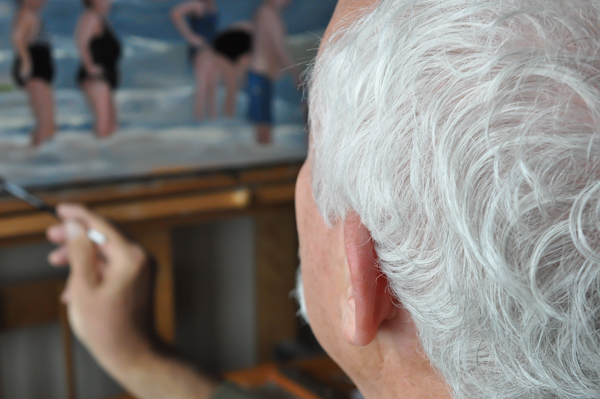 … my heart will grab the camera and make a different decision for me.

BTW, this painting is for sale.